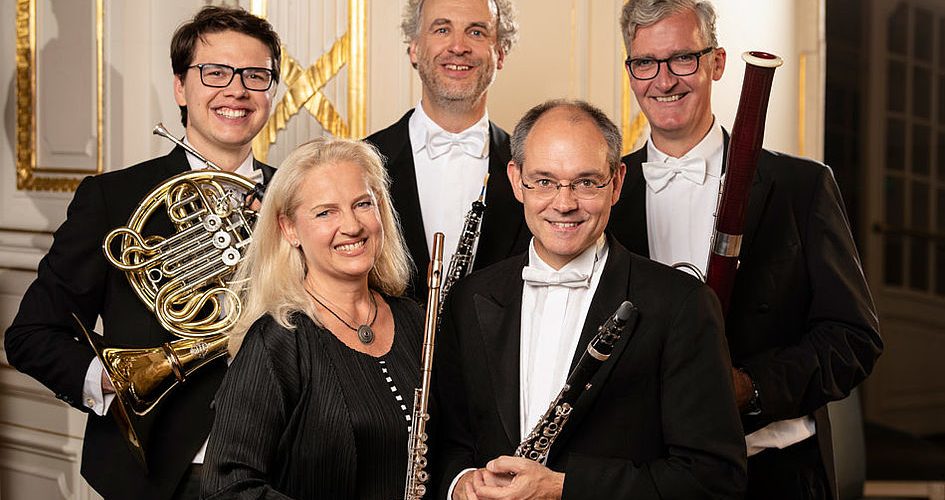 Save the date for the the Symphoniker Hamburg Orchestra at Hayy Jameel. Seven musicians with different musical instruments will perform at the courtyard at Hayy Jameel.

The programme of around one hour will be:

Brahms: “Allegretto” from the 3rd Symphony, for wind quintet

Limited capacity; free and and open to all
Biographies of the artists:

Susanne Barner, flute:
Susanne Barner studied with Karlheinz Zoeller and Aurèle Nicolet, receiving
numerous scholarships from organizations such as the German Academic
Scholarship Foundation. She joined the Radio Symphony Orchestra Frankfurt at
the age of 22 and was later named solo flutist of Symphoniker Hamburg.

Marc Renner, oboe:
Marc Renner was born in Stuttgart and studied at the music universities in
Hannover and Stuttgart with Ingo Goritzki. He performed with the
Württembergische Philharmonie before becoming solo oboist of Symphoniker
Hamburg in 1992.

Elmar Hönig, clarinet:
Elmar Hönig was born in Koblenz and studied clarinet and instrumental
pedagogy at the Hochschule for Music in Cologne with Franz Klein. He
completed his concert examination following postgraduate studies with Armin
Ziegler and has been the bass clarinetist of Symphoniker Hamburg since 1998.

Christian Ganzhorn, bassoon:
Christian Ganzhorn first studied with Ralph Sabow in Stuttgart and later with
Klaus Thunemann at the Hochschule for Music in Hanover. He performed with
Leonard Bernstein at the Schleswig Holstein Music Festival and participated in
numerous projects with Ensemble Resonanz in Frankfurt. Christian Ganzhorn
became the solo bassoonist of Symphoniker Hamburg in 1990.

Péter Gulyka, horn:
Born in Hungary, Péter Gulyka studied in Budapest at the Béla Bartók
Conservatory with T. Beleznay and at the Franz Liszt Academy with F. Tarjáni
and Z. Varga, where he received a master’s degree. He later studied at the
Hochschule for Music in Detmold with Michael Höltzel. He was a prizewinner
at the International Horn Competition in Brno and has been the solo hornist of
Symphoniker Hamburg since 2015.

Katharina Ivanova, first violin:
Katharina Ivanova completed her studies in her birthplace St. Petersburg with
Prof. Shulpjakov. During her studies she was already a member of various
Russian orchestras and subsequently toured numerous countries as a solo,
chamber and orchestral musician. Since 1999 she has been living in Germany,
where she first worked with the “Europa Philharmonie”. She has been a
permanent member of the Hamburg Symphony Orchestra since 2002.

Mihály András, second violin:
Mihály András studied already at the age of 14 in the class for young talents in
his hometown Budapest, where he passed his first diploma exam in 2007. After
further studies in Vienna with Prof. Eduard Zienkowski, which he completed
with distinction, he worked with various international orchestras. He has been a
member of the Hamburg Symphony Orchestra since 2017.